The Calgary Chamber of Commerce was entering their fourth year running Canada’s most successful Small Business Week and they weren’t content to rest on this achievement. Wanting to reach even more small- and medium-sized businesses, they approached us to help narrow down the search. They were keen to reimagine how their week-long event could be made even better and appeal to a broader demographic.

The major goals of the campaign were to reach the owners and leaders of small- and medium-sized businesses who wanted to drive growth; to reach forward-thinking entrepreneurs; to engage new
audiences in Calgary looking to support local businesses; to attract new and aspiring business owners; and to reach an attendance of 2,000 people at the event.

Small Business Week YYC began in 2014 and is the largest conference of its kind in Canada. It takes place during the third week in October and consists of a massive expo held under one roof, an academy of deep-learning sessions for entrepreneurs and an awards show and dinner that celebrates the city’s small business community.

We ran a month-long campaign during the month prior to Small Business Week YYC. The CCC wished to reach male and female adults between the ages of 18 – 54 who were either the owners or leaders of small- and medium-sized businesses, or who were part of the larger Calgary community looking to support these businesses. At the beginning of the campaign we geotargeted the downtown core, business parks, the Business Revitalization Zones of 4th Street, 17th Avenue, Inglewood and Kensington, and the surrounding towns of Airdrie, Chestermere and Okotoks. We used our unique Hyper approach that allows us to target only devices whose owners have the characteristics the client is looking for. 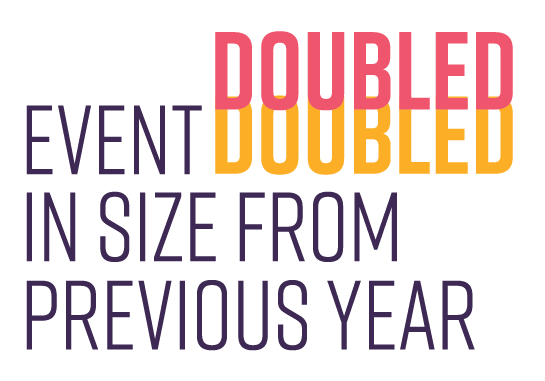 As the campaign progressed we saw that the ads targeting smaller towns were doing well, so we added Cochrane to the list and expanded our scope to include coffee shops and educational institutions as well as retargeting on both the SBWYYC and CCC websites. Midway through the campaign there was concern that too few tickets had been purchased via the Eventbrite landing page the ads linked to. We theorized, however, that often those who see an ad don’t click to make an immediate purchase, but rather will search the event website independently at a later time. Hyper by its nature creates awareness and is directly correlated to an increase in sales. Sure enough, on September 20 we tripled the amount of impressions served and saw an immediate spike in sales on the Eventbrite page.

This was the biggest Small Business Week the Calgary Chamber of Commerce ever hosted and they sold all 2,000 tickets! The event doubled in size from the year previous and had a CTR 2x higher than the industry standard.

When the campaign began the CCC had told us they were anxious about selling all 2,000 tickets. However, all the tickets were sold and it became the biggest Small Business Week they had ever hosted. The event doubled in size from the previous year and successfully reached small- and medium-sized business owners along with the sought after audiences. Overall, the campaign had a CTR more than double the industry standard and led to a satisfied client.

They were keen to reimagine how their week-long event could be made even better and appeal to a broader demographic.

They were so impressed with the results, they ended the relationship with their former AdWords provider and jumped ship to us.

The goal was to capture brand-new listeners as THE PEAK had recently rebranded as a modern rock station.