Daytona Homes was constructing a brand-new development in Stony Plain called Sovanna Bungalows that would appeal to those aged 55+ looking for conveniently packaged homes. The project consisted of duplex bungalows with easy-living features such as wider hallways, high ceilings, step-free entrances into kitchens, and full landscaping and snow removal services. Daytona was in need of a marketing strategy to reach this target customer, along with their adult children aged 18 – 35 who might help influence their parents’ home-buying decisions. They also wanted to increase website traffic, foot traffic to the showhome and boost awareness of the new development to the residents of Stony Plain. Daytona used LoKnow exclusively for this project and saw multiple holds placed on the lots. It was discovered early in the campaign that many in the target demographic of 55+ were unable to secure financing as they were pensioners. We took on the challenge of retargeting towards a younger demographic of 35 – 39 year-olds and the campaign was adjusted by adding a social media strategy.

The interest from this younger demographic was quickly realized with two holds placed within one weekend of the switch.

Daytona Homes has been a producer of carefully crafted single and multi-family homes serving Alberta, Saskatchewan and Manitoba since their 1993 founding in Edmonton. For this project they were initially hoping to build a development that would appeal to an older, retired group of buyers by creating homes with modern conveniences and minimal maintenance requirements. Daytona was quick to modify the original approach to focus on younger buyers when the initial plan switched gears.

This portion of the digital media campaign took place over two months during the summer of 2016. We introduced Daytona to our unique, Hyper-technology approach to advertising that allows us to target only devices whose owners have a set of qualities the client is looking for. We also used retargeting, Facebook advertisements and Google AdWords and twice adjusted the campaign to meet the client’s changing needs. An overall 0.72% CTR was achieved—the highest CTR in Stony Plain and nearby Spruce Grove, leading us to strategically adjust Google AdWords and Facebook ads towards these geographic areas—and multiple holds were placed on the lots. This success was attributable to LoKnow’s campaign as we were the sole media provider working with Daytona. We noticed when looking at a breakdown of an early campaign week that the time of day with the highest clicks and CTR did not align with the times that the showhome was open. We suggested that Daytona adjust their opening hours. When they did, they saw an increase of visitors to the showhome. 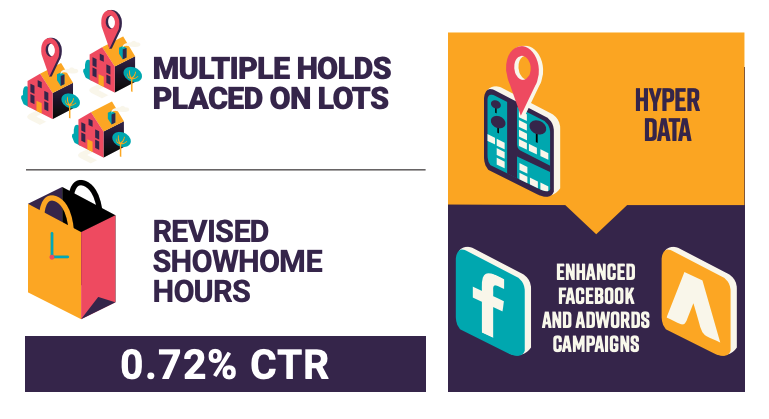 The ads resulted in a lot of interest and multiple holds were placed on the lots. Time of day data showed that customers were looking at the ads when the showhome was closed, based on that data, the showhome revised its hours. An overall CTR of 0.72% was achieved. 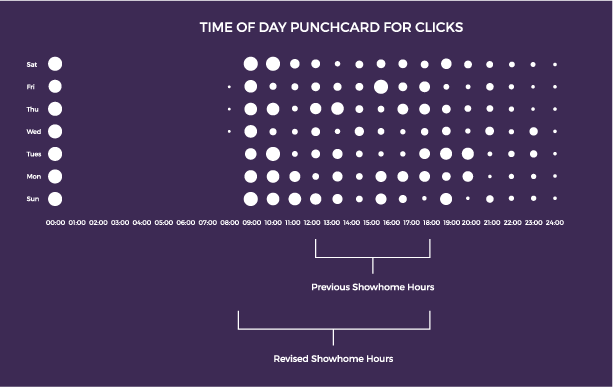 The campaign was successful, with an overall CTR of 0.72%. The use of Hyper allowed us to narrow our focus onto the specific demographic Daytona wished to reach—first those aged 55+ and later switching to a younger age group. When managing future campaigns for Daytona we will be able to use the differences discovered while targeting the two distinct demographic groups. Specifically, the time of day with the highest CTR and clicks changed dramatically with each group. For example, we saw iPad views decrease significantly when targeting the younger demographic. Overall the campaign was extremely cost effective, averaging $8.96 eCPM in September. The customer data accumulated through the use of Hyper led to multiple conversions and we were able to identify and isolate the target clients through demographic and geographical analysis. This allowed us to efficiently target Facebook ads and Google AdWords towards the right customers.

Orchards needed ads that would target prospective patients in nearby areas of Edmonton, rather than being placed haphazardly throughout the city.